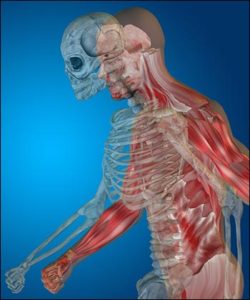 While bones, muscles, and skin have long been understood, documented, and treated by the Chinese. Unlike the West they do not separate these organs out into separate systems but understand and treat them as part of their Zang Fu and related Five Phase Element Systems. If there is an injury to a particular part of the body, the region as a whole is treated (the Bones, Muscles, Skin, Tissues etc. that are immediately impacted) as well as the Zang Fu involved, Kidneys if there is a Bone injury and the Spleen if there is a Muscle injury. The Lungs can be included in a treatment plan if the Skin is afflicted.

The Kidneys “rule the bones.” This function extends from the Kidneys being the system that stores Jing. Jing is Essence, the substance that is called “the root of life.” Jing’s function is the development of the body and that means the healthy development of bones and marrow. In TCM, healthy strong bones are a result of Jing and strong Kidneys.

The Spleen, is said to “dominate the muscles,” which refers to the Spleen’s function of nourishing and providing Blood (Xue) to the body as a whole and thereby ensuring that the limbs and muscles are also strong and healthy. Muscles are understood and documented by the Chinese (who have a long standing healing knowledge of massage, injury, and wounds from the battlefields as well as from life in general), but they are not treated separately from the Spleen/Stomach Zang Fu and Earth Phase (Element) that they are associated with.

The Lung’s “rule the exterior.” The Lungs are the most external of all the Organ Systems. They are responsible for Defensive Qi (Wei Qi) that protects the body from External Pathogenic attacks. The function of “Ruling the Exterior” includes supporting the Skin, the only other organ that breathes, the Wei Qi that flows through it, the opening and closing of pores, and the general health of kin all together. Luminous Skin is a sign of healthy Lungs.